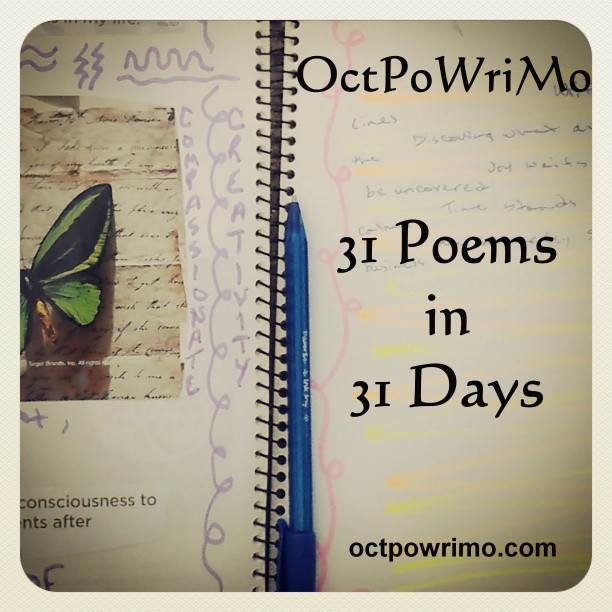 I won NaNoWriMo for the first time in 2018, after attempts across the years dating back to 2007. I didn’t have a book at the end, and I don’t have a book now, but I do still have over 50,000 words in a Word.doc, waiting for my eventual attention. NaNoWrimo 2019 is starting to whisper in my ear, wanting a commitment I’m not quite ready for.

What I may be ready for, though, is OctPoWriMo! It’s been happening since 2012, but I only just found out about this 31-poems-in-31-days challenge and am read to jump on board.

In Julia Cameron’s The Artist’s Way, she talks about starting the day with three pages, in long-hand, of stream-of-consciousness writing in order to prime the pump of creativity. Which is all well and good if you have unlimited time. My morning schedule allows time for journaling OR other writing–not both. I love journaling and my “Morning Pages”, as Julia calls them, and I’ve been banging my head on the wall o’ time for years, trying to rush through journaling and still have time for other writing before I have to get ready to go to the job that actually helps pay the bills.

The last three days, I’ve chosen to write blog entries, which makes me feel productive as a writer, but now my brain is starting to feel antsy on the edges because it hasn’t had the freedom of unfettered pencil time. Since my affirmation practice is part of my morning journaling process, no affirmations over the last few days, either. And now I have all the song lyrics about time in my head, just one example of the clutter daily journaling helps clear out.

I pretty much have about an hour each morning. I guess I need to set up an alternating schedule of journaling and blogging/writing so neither side is neglected. Except that I hate strict schedules. Maybe there’s an affirmation for that.

I started a new blog at the beginning of this year about being the caregiver for my mom, a part of my attempt to write my currently crazy life a little more sane. It’s helped, but as her care needs ebb and flow, so goes my writing time.

I’m still journaling regularly, still writing morning affirmations. And lately, thinking about this blog and how neglected it’s been. It occurred to me that, if nothing else, I could share links to writing and journaling articles that I find interesting or helpful, hopefully both.

With that in mind, I offer this link from Omtimes e-zine to an interview with Julia Cameron, who got me (and many other people) on the path of morning journaling through her book, The Artist’s Way.

Our lives are so busy nowadays that we rarely stop to think about what we’re thinking. Or even take enough time to actually think what we’re thinking. Thoughts zoom around, competing with television, radio, movies, plus the near- entirety of the world’s knowledge that we can now carry in our pockets and whip out at the first dreaded sign of having a moment’s idle time. Daydreaming, mulling over, ruminating – all take a backseat to the immediacy and retinal overstimulation of Candy Crush and Bejeweled on the playing-card-sized computers we carry around with us. I know it seems like a symbiotic relationship, but I have a secret suspicion our smart phones are more parasitic than beneficial, and may actually be our new digital overlords to whom we have yet to realize our level of enslavement. But I digress.

Unplug. Pick up your writing utensil of choice. (This is mine.) Start writing. Just let the words flow. After a little while, you’ll get to the end of the obvious things in the forefront of your mind. Resist the urge to check Facebook. Or Twitter. Or whatever your electronic crack-du-jour is. Write “I feel…” on the page and then see what your hand writes after it. Do it again. Ten more times. Whenever something you write surprises you, write some more about that. Or maybe “I want…” or “I think…” would be better starters for you. This exercise is for giving yourself time to actually think out the thoughts that sometimes flit away too fast or are constantly preempted by other concerns or distractions. Time to feel the feelings that are too often squashed with chocolate chip cookies and ten more games of Solitaire.

During my writing time this morning, I decided to write out a WANT! list and then rate the items so I could decide what I might purchase next. I discovered that most of the things I wanted to put on my WANT! list weren’t things I could get with money. I discovered that I pretty much have all the stuff I need. What I really want is more time for writing. And realizing that, I can make a plan. And so can you.

Building an effective affirmation can be kinda tricky when you’re first starting out. So many of us have things we want to change, bad habits we want to let go of, that sometimes it’s difficult to not include in the affirmation the thing you’re trying to get away from. Remember the old joke about trying not to think of a pink elephant? Once the image is in your mind, it’s hard to get away from it. And it’s the same thing with affirmations. You want to be sure that you don’t mention, in the affirmation, the thing you’re trying to get away from, because your brain doesn’t recognize negatives. Just like trying to not think of that pink elephant, anything you include will be brought to mind, which is, with stuff you want to lose, the exact opposite of your goal. For example, say you want to quit smoking. You can’t make an effective affirmation that includes the words “smoking” or “cigarette” because that will just get you thinking about needing a smoke break.

You also want to make the affirmations be in the present tense. If you put the action in the future, then your brain is always going to lazily put off action until a later time, because the affirmation doesn’t apply to now. You don’t want to write “I will…” or “I intend…” or any passive verbs that put the action at some time other than this moment.

Some possible choices, some of which may also work for other things, too, are:

I make healthy choices. (This one would also work with your desire to make healthy dietary choices, or healthy relationship choices, etc.)

My health improves every moment, with every breath.

With every breath, I fill my lungs with clean, fresh air.

An affirmation I used for a really long time, in order to correct a long series of poor choices, was:

I release anything that is not for my higher good and ask it to release me.

Another thing to keep in mind, at least for me, is brevity. Some affirmations I’ve come across that others have written, just seem to go on and on. Since I choose one or two to write in my daily journal, five times each, having an affirmation that takes up two or three lines makes me less likely to choose that one, and less likely to be able to remember it during the course of the day to replace any negative self-talk I catch myself using.

My affirmations for today? I act on my intentions (like writing this blog post) and I attract my highest good (because who doesn’t want that?).

I try to journal every morning, and by “journal”, I mean that, in keeping with Julie Cameron’s direction in The Artist’s Way, I write three pages of long-hand, stream-of-consciousness, brain dump into a 99-cent (sometimes half that at Back-To-School sales) composition book.  On good writing days, I am journaling at my writing desk with my morning coffee before ever setting foot into the office or even looking at the computer from the doorway. And at the end of my 3-page (or more if there’s a lot going on) daily entry, I choose one or two affirmations to write out, five times each.

My primary affirmation, one that I’m really trying to fully incorporate into my on-going inner dialogue is:

I act on my intentions.

I have lots of ideas, lots of things I would like to do, but I am not skilled at turning ideas into plans and then plans into goals. The bigger things I really want to do get smothered under all the little day-to-day things that I have to do just to make a life. Eating. Grooming. Cleaning. Working. Interacting with human and canine housemates. Unwinding at the end of the day. Without intending, the days just all seem to drift away, not unhappily, but unremarkably, and with no concrete representation of their passing.

I set up this blog over a year ago, with the intention of blogging a book from it. And since then, I’ve thought about it a lot. Thought, considered, internally composed, made chapter lists and sample outlines, and pretty much everything but actually writing blog posts here. But today, when I have less writing time than I normally do due to morning meetings, I have come into the office with the express intent of really getting started here. After mere months and hundreds of repetitions of this affirmation, it seems to have finally taken hold.

Learn about Goan and Indian Recipes

Not The Roommate I Expected

In Love On the Road

"Senescent" means getting old. Old is good. Old can be funny. Can you tell the difference between sly, sardonic humor and a serious statement? If not, don't stop here!

a piece of my ADD mind

"I am not crazy" - a septuagenarian white man tries to understand